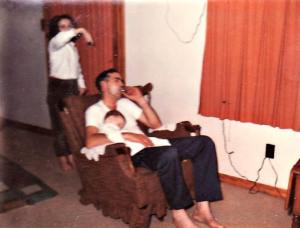 My grandpa putting me to sleep by playing his harmonica. My aunt is in the back.

He was the best Grandpa!!! I was extremely fortunate to be able to spend some amazing one on one time with him for many years, especially when I was younger. This was even though we lived about an hour apart.

I also remember when my mom would bring grandpa one of his favorite treats from her: a can of sardines. I know, right? Anyway, I would always jump up onto his lap and he would share one with me. The truth is… I thought that they tasted terrible, but I wanted one and even pretended to really like them, because this was one of our special things between us. 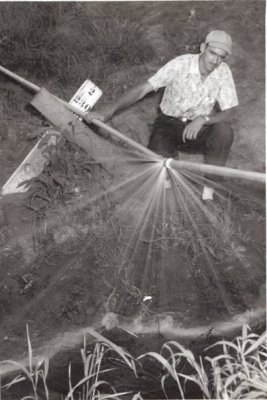 Grandpa also was the one who would take me to the bus for camp when I was going to the one further away from home (when I got into my teen years). Those couple of times were terrific. I remember going to get some kind of goodie (doughnuts and cocoa, I believe) and going with him for a little while to the golf course where he kept the grounds green and perfect. I was like, “I get to go to work with Grandpa!” We weren’t there that long. I think he probably just turned on some sprinklers or something before it was time to take me to the meet up place, but I never forgot those precious days with Grandpa.

My grandma was a wonderful person who I got to know even more starting after my mom suddenly passed away when I was 19. This was 16 days after my mom turned 40. By the way, the 30th anniversary of her death is in 4 days (March 20, 1987).

But my grandpa… he was my personal hero of my childhood. I always felt amazingly safe with him and truly knew that he really cared about me. I felt extremely special to him and I needed that.

Helping Grandpa With His Chores

I loved going out and helping him do his chores on the farm when I was little. I got upset if we did not get to the farm soon enough for me to be able to go out and help him.

He once had this cow named Blaze. I loved Blaze. One time when I didn’t get there in time to help him on the farm, we were sitting at the table eating and my grandma was proudly telling my mom that this was Blaze. Proudly, because evidently the meat was so good…  I questioned what she meant and she unfortunately explained.

I obviously couldn’t eat anymore. There was A LONG time after that where I wouldn’t eat anything that I knew or thought was beef. Just in case… We ended up eating a lot of “pork” during this time. Yes, grandpa also raised pigs, but I figured out later that I had eaten a lot of Blaze when my mom had me convinced that it was actually pork (so I would eat it).

From then on I never wanted anything we would eat in the future to have a name. I do know that there were times that my grandpa “sold” a cow or pig, but I’m thinking that we often had some of them, too.

When I grew up and lived on a couple of farms, I could never name the livestock, because of this reason. I could raise them and even have them butchered as long as they didn’t have a name.

Grandpa Got Me In Trouble… lol

Grandpa got me into trouble when I was in 2nd grade because of something that happened while I was helping him with his farm chores.

He had killed the turkey we were going to have that day while I was out helping him. I apparently was fascinated with how they could still jump around etc afterwards.

When I went back to school, my teacher had us do one of those “What did you do over Thanksgiving break” kind of pictures and write a few sentences.

Well, she asked for it. LOL I drew a picture with what I saw…. in full color and details. Spurts from the top, and more. I even included the ax, all the body, and what it would have looked like afterwards….lol   Evidently, it was quite realistic…

My mom was called into the principal’s office, because the teacher was “concerned” about my mental health and probably my welfare. I was informed by my mom to NEVER write or draw pictures again of what I saw on the farm and my grandpa got chewed out over the phone that evening.

(There are actually a couple of other namesakes of Grandpa’s, but not with the particular name of Grandpa’s that I chose.)

There were SO many wonderful times with my Grandpa!!! He is actually why I named my son what I did.  We named him after one of grandpa’s names. I got this idea back when I was about 13, but already knew to keep that idea a secret if I wanted to be the one in our family to “get” that name…LOL  I think I mostly got lucky with this name, because our family has A LOT more girls, so not as much competition for the best boy names. We have SO many girls that a lot of the best girl names were taken years ago, including the name I had decided I wanted to name my daughter after a school friend had moved away.

Grandpa’s mom, Martha Agnes died when Grandpa was only about 15 months old and she was almost 23 years old. She left her husband, Arthur Jacob, with three-year-old Lena Genevieve and my grandpa.

Lena died when she was only 10 or 11 years old. By this time, Arthur Jacob had married Ethel Helen WURTZ, whom I grew up knowing as my great-grandma. I remember knowing from a really young age that she was Carlton’s step-mom, but she was the mother who raised him. She lived to be 94 years old and had about 10 or more children of her own with my great-grandpa, Arthur Jacob, whom I never knew.

My step/adopted father, Jack Fredrick LAKEY, Sr. also was in World War II. Neither of them would ever tell us much about their time in the service. I would really like to at least know a little bit about their service to our country.

I remember one time when the subject came up and I was in my early teens. I’m pretty sure that I was the one who had asked the question. They were both sitting there and I was watching them.  They did not really show much, but they looked at each other in a knowing way. That always intrigued me, but also told me not to ask again. They did not want to even think about it. It honestly was one of the closest times I experienced between the two of them, though. They were definitely communicating with each other in a secret, knowing language of a soldier.

Carlton Nathanial WILLIAMS (Grandpa) and Ruby Irene PORTER (Grandma) were married on October 14, 1944. Together, they had 4 biological children and 2 adopted, as well as caring for over 30 babies until their adoptions and over 20 foster children during their life together.

My grandma told me that grandpa was an Agronomist. I just looked that up and Agronomy is the study of agriculture dealing with field-crop production and soil management. I know that he did not go to college, so this was all learned the hard and old-fashioned way… through hard work and experience. He worked for MANY years at the Rockwood Golf Course in Independence, Missouri. He was in charge of keeping the grounds at the golf course green and perfect. He was also (as you read above) a farmer.

Carlton and Ruby Irene WILLIAMS with their two oldest children. My mom is the girl in the middle.

My grandpa and grandma had also earlier been migrant farmers (at least part of the time with some of their children along with them). You can read about my grandma’s thoughts of being called a migrant farmer as well as all about her on my post: My Grandma Ruby Irene PORTER WILLIAMS.

Grandpa passed away on July 31, 1991, after an extremely long battle with cancer. I believe it was well over 10 years. By the time he passed, it was throughout his whole body and (the way I understood it) included both paths (or courses) taken throughout the body. (For example: as it was explained to me… cancer in certain organs often lead to cancer in the next organ, and then the next… Grandma said that he had 2 paths going through his body. I believe it began in his brain or colon and over the years continued to grow in more places. Grandma said that part of his cancer was genetic, which we have seen throughout our family, and part of it was likely from some Mustard Gas in World War II.) His long, hard battle with cancer was why Grandma chose not to do any major treatments when she had cancer.

I was fortunate to be living back in the area (after college) when Grandpa passed away. I was also honored to be able to help Grandma care for Grandpa near the end, too. I was living with them for several months and then only about a half hour away for the remaining of that year that he passed. He often thought that my mom was still living, but only about my age or younger. He usually knew who I was, who my mom was, and that I had a young daughter at the time… but the details of our ages and that she had passed away would throw him off. I didn’t ever try to explain it, because he was a proud man (and cancer tries to take that away from you) and I didn’t want him focusing at all on the fact that his daughter was gone.

I miss Grandpa ALL THE TIME! He was my main strong and positive male role model and male caregiver in my early years. He is totally worthy of telling you all about him in even greater length than I have today as well as having three people now named after him!

I miss you and love you SO much Grandpa! Happy Birthday!

I am a 52 year old mom of a 32 year old daughter and a 19 year old son. I'm happily married and I homeschooled the whole way through. Our youngest has been diagnosed as having Asperger's and I have an Atypical form of Parkinsonism, BPPV, Pseudo Cushings, Fibromyalgia, AGHD, and more. My family means everything to me! I am a northern Nevadan Christian working from home mom who also blogs and loves some of the social media communities. I also started as a doTerra Wellness Advocate on my 50th birthday. I'm a self-proclaimed advocate for Asperger's Syndrome, all of the Autism Spectrum Disorders, and special needs in general. I am usually found blogging, pinning, tweeting, and posting about homeschooling, genealogy, Parkinsonism, being Gluten-Free, books, recipes, and anything else on our family's Christian Journey...
View all posts by nvlynnae →
This entry was posted in WILLIAMS ~ FRARY ~ WURTZ and tagged FRARY, Grandparents, PORTER, WILLIAMS, WURTZ. Bookmark the permalink.