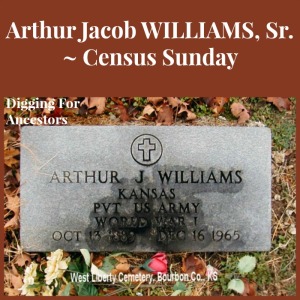 I have successfully found census records for him and his family from the Federal Census for 1900-1940 (except for 1910) as well as the 1925 Kansas State Census.

Today’s post will include his 1920 Federal, 1925 Kansas, and 1930 Federal in order to share a sad story that he had in common with a few other of our ancestors: losing his wife while caring for young children. When I discovered the 1925 Kansas Census the other day, I discovered something that I did not know. Arthur went to live with his widowed mother-in-law for awhile after his first wife’s death and before he was remarried.

So, as you can see… Arthur’s life went through several huge changes in those ten years. Fortunately, many of those were happy events.

Arthur Jacob WILLIAMS went on to have over a dozen children with most of them living well into adulthood. His eldest daughter, Genevieve, however only lived for a short time after this last census. She passed away one day shy of a year after this page of the census was taken. (This page was enumerated on April 15, 1930). She was 11 years and 12 days old when she passed away (March 30, 1920 – April 14, 1931).

Arthur Jacob WILLIAMS was my great-grandfather and the father of grandpa: Carlton Nathaniel WILLIAMS, and he was the father of my mom: Carol Elizabeth WILLIAMS LAKEY.

I am a 52 year old mom of a 32 year old daughter and a 19 year old son. I'm happily married and I homeschooled the whole way through. Our youngest has been diagnosed as having Asperger's and I have an Atypical form of Parkinsonism, BPPV, Pseudo Cushings, Fibromyalgia, AGHD, and more. My family means everything to me! I am a northern Nevadan Christian working from home mom who also blogs and loves some of the social media communities. I also started as a doTerra Wellness Advocate on my 50th birthday. I'm a self-proclaimed advocate for Asperger's Syndrome, all of the Autism Spectrum Disorders, and special needs in general. I am usually found blogging, pinning, tweeting, and posting about homeschooling, genealogy, Parkinsonism, being Gluten-Free, books, recipes, and anything else on our family's Christian Journey...
View all posts by nvlynnae →
This entry was posted in WILLIAMS ~ FRARY ~ WURTZ and tagged "Census Sunday", Genealogy, Kansas, WILLIAMS. Bookmark the permalink.