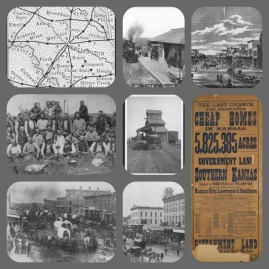 The 1880 Census for Moses and “Polly” PORTER household shows the following:

My second great-grandfather, Daniel Marion PORTER, was born December 28, 1855 in Moweaqua, Shelby County, Illinois to Moses Franklin PORTER (1826-1900) and Elizabeth Ann HOSKINS (1828-1855).  Elizabeth died due to the childbirth of Daniel and an un-named twin who died sometime after the new year.  Daniel died February 27, 1925 in Winfield, Cowley County, Kansas.

The 1880 Census for Daniel and “Carrie” PORTER household shows them  as neighbors to Moses and “Polly”.  Their details are as following:

My main questions: Why were Joseph and John Montgomery listed as servants on this census?  Where they related in some way?  Why did they list the very young children of Moses and Mary as different types of laborers?  Did they go to school?

Here is a copy of the original 1880 Census for these two families:

Moses PORTER and Daniel PORTER Families in the 1880 Census

I have also created a Pinterest board called Sumner County, Kansas that focuses on photos of people and places in Sumner County in the late 1800’s and links to genealogy resources for the area.  Be sure to also go to my main Pinterest page to Follow All of my boards.

I am a 53 year old mom of two (now 20 and 33). I'm happily married and I homeschooled our youngest the whole way through. Our youngest has been diagnosed as having Asperger's and I have an Atypical form of Parkinsonism, BPPV, Pseudo Cushings, Fibromyalgia, AGHD, and more. My family means everything to me! I am a northern Nevadan Christian working from home mom who also blogs and loves some of the social media communities. I also started as a doTerra Wellness Advocate on my 50th birthday. I'm a self-proclaimed advocate for Asperger's Syndrome, all of the Autism Spectrum Disorders, and special needs in general. I am usually found blogging, pinning, tweeting, and posting about homeschooling, genealogy, Parkinsonism, being Gluten-Free, books, recipes, and anything else on our family's Christian Journey...
View all posts by nvlynnae →
This entry was posted in PORTER ~ BOWLES ~ MEREDITH ~ SMITH and tagged Census Sunday, GILBERT, Kansas, PORTER, ROSENBERGER. Bookmark the permalink.